Structure or chaos? – a little bit of everything 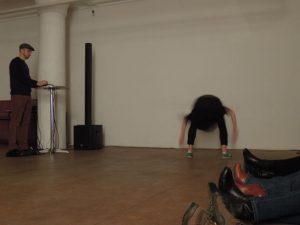 Franziska: Repetition plays an important role in your upcoming performance at Lettrétage. Can you explain the idea?

Dirk: I work with a so-called „Loop Station“, with which I can record and repeat my vocals live on three different tracks. I can also mix the tracks spontaneously. Repetition is one important element of our program. I see repetition as a fundamental aspect of life. It is the structure behind all activities and all technology. We are surrounded by repetition everywhere and I try to use this principle artistically.

The interesting thing is that repetition is always something to do with structuring – but the more you structure, the more chaotic it can get in the end. There is a tipping point where repetition looses its structuring function and dissolves in chaos: The title „A Pile of Frames“ refers to that phenomenon, as it imagines a heap of overlapping frames that become opaque in the end.

Milla: It is also an attempt to consciously stick to one thing. We are so used to fast cuts and change of perspective; always waiting for the next thing. It is also popular in dance, this tendency to present tricks that are as exciting as possible as quickly as possible in order to be entertaining. This makes it difficult to stick to a few simple elements and concentrate on them, but in the end it gets very complex. The further we go with the sound and the movements the repetition changes the character of our actions. This initial difficulty in sticking with the basic elements may be an experience that both we and the audience are sharing. Then, when you make small changes, and you realize how much is actually happening with the voice and the dance, it gets really interesting.

Dirk: We usually have this drive to move on, to always create something new and exciting. That makes it hard to restrain yourself and to maintain concentration. However, to create something new through repetition is very easy. Perception changes automatically. When I hear one and the same thing over and over again, at some point I will hear something else.

Franziska: How do you combine dance and sound elements in this performance?

Dirk: Our performance seems very reduced at first: there is no extra backdrop, no props or costumes. We try to concentrate on the pure movement and the pure sound. The text is important in that it initiates associations. Strange instructions, for example are one specific element. The topic of structure and framework is taken up by the words: you could imagine a bureaucratic framework, a waiting room of a doctor or a social welfare office, but you can also imagine something completely different. The text should be open enough to allow a range of ideas.

Milla: We have also agreed that the movements do not simply illustrate the text. It would be easy for me to go along with the text because it is so strong, but I try not to do that. I don´t like to show my own interpretation and thus narrow the audience’s freedom of association. I think it’s good that the lyrics are not that extensive. It’s usually easier to stick to words, but then the movement might become completely incomprehensible. Since there is no long story, there is space for the movement.

Dirk: In interaction, the sound and the rhythm of the words are connecting elements. Sometimes the focus shifts so that the meaning of the words becomes less important. The sound becomes the dominant feature.

Franziska: You have already developed „A Pile of Frames“ a year ago and have performed it many times. What do you think could be different at Lettrétage?

Milla: Of course, there are a few fixed elements, and we discuss and rehearse each performance, but improvisation is an important part and the result is never exactly the same. We also try to adapt our piece to the different performance spaces and atmospheres we encounter.

Working in front of an audience raises the energy level of the whole performance substantially. There are always new things happening. The physical presence of the audience in small places is still something special for me. It is a different experience in a theatre room where the audience is usually far from the stage.

Dirk: And in every place we find a different audience. For example, I find it exciting to be able to confront people in a more literary space with sound and dance. This mixture of unusual places and unfamiliar audience is very exciting, especially since our piece is not easily definable in terms of genre. Theoretically it can be assigned to different genres. You can experience it as music, dance, text or even a literary project – it´s everything.